MUSIC AND IMAGE: BAROQUE AND BEYOND
Abstracts in Program Order

The 1589 Florentine Intermedi (in celebration of the wedding of Grand Duke Ferdinando I de’ Medici to Christine of Lorraine) include two scenes employing musical echo effects: the first intermedio where Dorian Harmony descends to earth; and the fifth as Arion bewails his fate when his crew attempts to throw him overboard. In a recent monograph on the Intermedi, Nina Treadwell discusses both scenes primarily with respect to their possible staging and what she sees as an attempt to give rise to the feeling of meraviglia, thereby conferring symbolic power onto the Duke.

However, with respect to cultural products, the political reading (important as it is) merely scratches the surface. This is particularly the case with the 1589 Intermedi, steeped as they were in a deep admiration for ancient myths and philosophy, and informed throughout by a literary bent that borders upon preciosity. In this paper, I will explore several of the literary tropes surrounding the figure of Echo by the 16th century that most likely impacted the notion of Echo embraced by the collaborators working on the intermedi. The most pervasive and intriguing strand within the Italian history of Echo-reception derives from the Pythagorean dictum beseeching his listeners to “Implore Echo when the winds are blowing.” I will endeavor to show that these “appearances” of Echo were as philosophical as they were political and were intended to enhance not simply the power of the Duke, but also the reputation of the musicians and, indeed, of Music itself.
PAUL SCHLEUSE (Binghamton University, SUNY)
Image and Imitation: The Function of Woodcut Illustrations in Adriano Banchieri’s Canzonetta Books

Illustrations in prints of renaissance polyphony are extremely rare, beyond generic elements like initial letters, decorative borders on title pages, and printer’s marks. When they do appear they can tell us much about a book’s function, since as unusual (and expensive) additions they could not have been used haphazardly; as images not visible to a separate audience they strongly suggest that the music was primarily intended for the enjoyment of the singers themselves. A handful of prints from the years around 1600 use images of theatrical performances in precisely this way, most notably Orazio Vecchi’s L’Amfiparnaso (1597), whose woodcuts were custom-made to portray situations from the commedia dell’arte-style scenario that unifies the book. Vecchi’s imitator Adriano Banchieri composed no fewer than four distinct books of three-voice canzonettas that rewrite L’Amfiparnaso and also use woodcut illustrations, but they do so in a more haphazard manner. A few of Banchieri’s images—specifically those for the prologues addressed to imagined audiences— are borrowed or copied from Vecchi’s book, but I will show that others in La pazzia senile (1598 and later revisions) and Il metamorfosi musicale (1601) come from a set of at least thirty-one generic theatrical images that first appeared in prints of Venetian comedies in 1591 and 1592. My examination of these woodcuts will shed new light on Banchieri’s purpose in repeatedly re-inventing L’Amfiparnaso, on the recreational function of these books, and on his shifting views of performance practice for these works at a time that also saw the emergence of opera.
ELLEN ROSAND (Yale University)
Becoming Conventional: The first operatic collaboration between Francesco Cavalli and Giovanni Faustini

La virtù de’strali d’Amore, performed in Venice at the Teatro S. Cassiano in 1642, has the distinction of being the first of the ten operatic collaborations between Francesco Cavalli and Giovanni Faustini. It was during the course of those ten operas, that the conventions of 17th-century Venetian opera essentially took shape.

It may be somewhat obvious to consider Virtù from the vantage point of the fully developed style of the Faustini-Cavalli team, as the first in a series of works in which a system of conventions evolved, more or less gradually. But in fact that exercise offers a revealing perspective on the emergence of those conventions, allowing us to appreciate how imbalances and rough spots in the initial collaboration were worked out in subsequent ones.
THOMAS LIN (Harvard University)
From Pietà to Delizie: Revising Cicognini/Cavalli’s Giasone

Francesco Cavalli’s Giasone (Venice, 1649) was a wildly successful collaboration between the seasoned opera composer and the playwright-turned-librettist Giacinto Andrea Cicognini. Its performance history—forty productions throughout Italy over four decades, survived by sixty-two unique sources—was unmatched during the Seicento. While almost all of its librettos provide evidence of revisions made to Giasone after it left Venice, four near-identical prose editions that surfaced in the 1660s illuminate a rarely documented stage in the creation of a seventeenth-century opera: revisions before the premiere. Alongside pre- (first) and post-premiere (second) impressions of the libretto, this prose version provides us with some insight into how Cavalli, who by 1649 had eight operas under his belt, might have had a hand in helping to shape the text by Cicognini, who until then had written only two librettos.

Anna Tedesco has recently hypothesized the prose version to have been prepared by Cicognini himself—a playwright for most of his life—as a working draft for the verse libretto. Indeed, it occupies a fluid position within Giasone’s compositional history, as unique elements of it are found in the first two impressions of the libretto. Building on Tedesco’s work, my presentation untangles this often complicated relationship between the three versions by examining Giasone’s early revisionary history. Specifically, I focus on the creative process by which the iconic entrance aria for the title character, “Delizie, contenti,” (“Delights, joys”) came to be. It might never have been written without Cavalli’s intervention; originally in its place was a short strophic song titled “Amor tutto è pietà” (“All love is compassion”) that exists only in the pre-premiere libretto. Thus I seek to shed light on the circumstances surrounding the creation of “Delizie,” that sensuous calling card for the Seicento’s quintessential effeminate hero.
GEORGIA COWART (Case Western Reserve University)
Performing a New France: Watteau, the Musical Stage, and the Satire of Absolutism

Antoine Watteau (1684-1721) worked briefly as a set painter at the Paris Opera House around 1702-1703, and a number of his most well known paintings can be explained by a series of spectacles performed in the Parisian musical theater over the course of his career. I argue that these encode a critique of the recently deceased Louis XIV, while offering utopian visions of a new France. Drawing on the opera, ballet, and the musical comedy, I will examine the imagery of Les Comédiens français and Mezzetin at the Metropolitan Museum of Art, and Les Comédiens italiens at the National Gallery in Washington, D. C., along with other related works. Comparing these to royal portraiture and an iconography of Bourbon power, I will bring forward evidence that through the parody of absolutist paintings and engravings, Watteau subtly satirized the king and the trappings of his propaganda by means of the following strategies: 1) the substitution of comic Everyman types, the peasant and the valet, for the king; 2) the development of a complex imagery centered on the fool; 3) the occasional depiction of the satyr, symbol of satire; 4) an elaborate satire on the Arms of France, along with the king’s portrait the most iconic signifier of absolutist identity; 5) the satire of Louis XIV’s persona as a Roman warrior, and the literal upending of his official state portrait; and 6) the staging of a new society, represented by a commercial art market that, absorbing the imagery of the musical theater, had inherited its satiric vision of a new France. 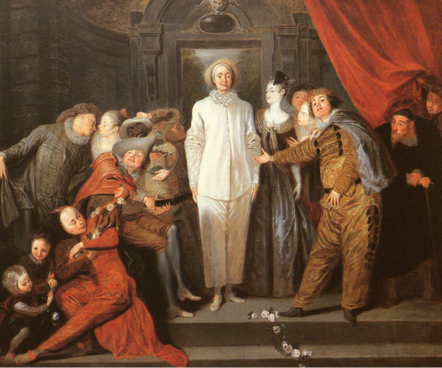 JEFFREY KURTZMAN (Washington University)
What did Italian composers really do after Trent?

Studies of the Council of Trent and its impact on music have focused on the Council’s decree regarding the mass (misquoted until recently), pre-conciliar discussions of the role of music in the Church, and the response of just a few composers to the objectives of the Council. Until the past few years, the Italian sacred repertoire of the post-Tridentine period has been a vast unknown territory, but now, through Anne Schnoebelen’s and my catalogue of all mass and office music published in Italy 1516-1770,  it is possible to understand what composers actually did in response to the Council. The number of composers who claimed that they were following the requirements of the Council in title pages or dedications is minute in relation to the number of published composers from 1562-1605, and their focus is more on Psalms for the Office than masses. Despite the fact that no mention of intelligibility of text appears in the Council’s decree, several composers do mention this issue in their dedications and most composers did pay more attention to clarity of text than previously. Most surprising is that the standard interpretation of the Latin word lascivum has been mistaken and that more imitation masses based on secular melodies or compositions were published after Trent than before Trent. Moreover, despite efforts to limit instrumental participation to organs, instruments other than the organ played a constantly increasing role in both performance and composition of sacred music from immediately after Trent without surcease.
JULIA GRELLA-O'CONNELL (SUNY - Broome Community College)
Hearing Voices: Sound and Nineteenth-Century Religious Conversion

While religious experience in Victorian Britain is generally characterized as a “crisis of faith,” and while it is certainly true that, post-Darwin, some prominent British subjects (including George Eliot) publicly renounced religious belief, there was also, in the mid-nineteenth century, a concomitant religious revival, which resulted in some notable conversions. While this revival can be attributed to many factors, including widespread dismay over social products of industrialization, I argue that the changing auditory landscape of Victorian Britain—itself a by-product of industrialization—and the transformation of sensory experience also contributed to this revival, and that some of the most notable of these conversions were, like St. Augustine’s in the fourth century, accomplished through the ear. Examining the art-historical and literary records, as well as the first-person testimony of Franz Liszt’s protégé, pianist and composer Hermann Cohen, who was active in England both before and after his conversion, I contend that religious experience in the nineteenth century—especially that of converts—was catalyzed by auditory experience.
Powered by